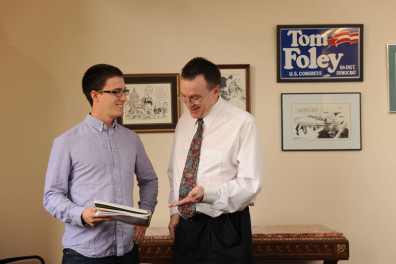 Philosophy faculty specialize in bioethics, ethical theory and applied ethics, metaphysics, epistemology, philosophy of language and science, and the philosophy of religion.

The Thomas S. Foley Institute for Public Policy and Public Service is closely affiliated with PPPA, and the school actively supports the Joseph Kruzel Foreign and Defense Luncheon Series, the Frank Fraser Potter Memorial Lecture Series, and the Research and Methods Symposium.

The Ph.D. in political science emphasizes a generalist and multi-methods training; students specialize in their dissertations on areas related to faculty members’ research interests. Full funding for Ph.D. students is available on a competitive basis.

Philosophy faculty specializations include bioethics, ethical theory and applied ethics, metaphysics, epistemology, philosophy of language and science, and the philosophy of religion.

More about the faculty »

The B.A. in political science was first awarded in 1930 and the M.A. in 1932 by the History and Political Science Department at the State College of Washington (renamed Washington State University in 1959).

At this point, an opportunity arose to pursue a dynamic merger integrating the Departments of Philosophy and Political Science in Pullman into one school, along with the master’s program in Public Affairs in Vancouver.