Many of PPPA’s Graduate students presented at the Pacific Northwest Political Science Association annual meeting that took place in Boise, on October 15th-17th. Two of our graduate students, Pip Sherwood and Julia Pusateri, won awards for their posters. Congratulations to you both! Pip Sherwood shares her account of recent conference attendances. She writes,
“In the past four months I have had the pleasure of representing Washington State University and PPPA at three different conferences, the International Society of Political Psychology Annual Meeting in San Diego, 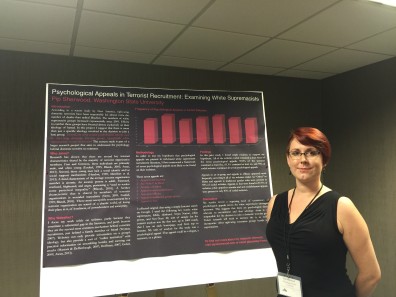 the American Political Science Association Annual Meeting in San Francisco, and most recently, the Northwest Political Science Association Annual Meeting in Boise. At each conference I presented solo-authored work, either in a paper presentation or a poster session. While every conference is fun and exciting, I especially enjoyed the PNWPSA, where I won an award for best poster presentation for my poster, “Psychological Appeals in Terrorist Recruitment: Examining White Supremacists.” It was wonderful to see so many other PPPA graduate students presenting there as well. The critiques and feedback that I received at these conferences will be of great help in 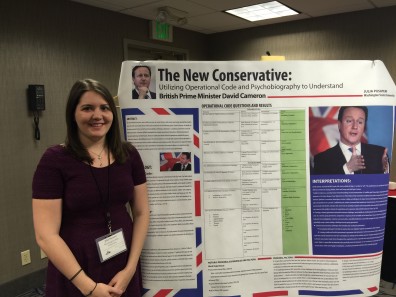 the year ahead, as I continue to work toward completing my dissertation.”