Graduate Students are given the opportunity to publish and present their research at conferences. One PPPA Graduate Student, Orion Yoesle, presented along with faculty member Dr. Michael Salamone. Yoesle explains:

“From September 1st – September 6th, I stayed in San Francisco to attend the American Political Science Association (APSA) annual meeting. There I presented, along with Dr. Mike Salamone, research related to campaign messaging in State Supreme Court advertising.”
“Ideology and Television Advertising in Judicial Races” Michael F. Salamone & Orion Yoesle
Abstract:
Thanks to the Supreme Court’s decision in Republican Party v. White, judicial candidates have been free to make ideological statements in their campaigns since 2002. However, judicial candidates may feel constrained by professional norms from engaging in overtly, political campaign speech. Using data compiled by the Wesleyan Media Project, we employ WordFish, a computational text analysis technique for ideological scaling, to attempt measure the relative political positions of judicial candidates using their television advertisements. We begin evaluate the reliability of this technique as a measurement of judicial candidate ideology. To this end, we compare this measure to an alternative measurements of ideology. If judicial norms constrain campaign behavior, we do not expect the two measures to correlate, particularly when deriving our measure only from candidate sponsored ads. We also test to if different campaign factors, such as the degree of competitiveness and whether the race is partisan, predict different measures of ideology. Though our preliminary results are mixed, we find some promising paths for subsequent analysis.”

PPPA Graduate Student, Fernanda Almeida Buril, also shares her recent experiences in attending a conference and a workshop. She writes:

“Last July, I presented a paper at the Central European University, in Budapest, Hungary, during a summer course in Religious Violence. My paper was on how the belief in an afterlife can distort individuals’ calculations of costs and benefits.
Now, in September, I attended a workshop in the Evolution of Warfare organized by the National Institute for Mathematical and Biological Synthesis (NIMBioS), at the University of Tennessee in Knoxville. An interdisciplinary workshop attended by many prominent scholars using evolutionary

approaches to the understanding of conflict and war in Political Science, Psychology, Anthropology, Mathematics, Physics, among other disciplines.” 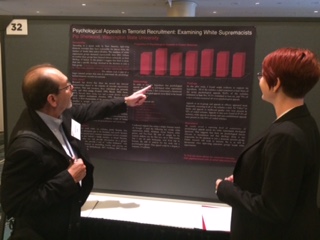